2012 China and double reverse review just in July this year, for the first time ended, the second retrial and menacing, may be found in early results will be published in the near future, eventually found to be settled in the year 2016. EnergyTrend observation of the TrendForce’s new energy business Department, which is currently in early progress only in anti-dumping some of the preliminary findings, such as according to estimates about 5% tax rates drop, Trina solar will be the big winner, stability in the United States market share, Motech lose tax advantages, Mau di indirect impact United States the quantity and price of the order. As regards anti-subsidy portion are likely to remain flat.

EnergyTrend Lin Yanrong, an analyst pointed out, if only to observe the anti-dumping tax rate reduction, manufacturers generally 2.4%, is unlikely to decline. Direct domestic shipments from the mainland United States is most Trina, this review is the biggest winner, only anti-dumping margin fell 5.14%.

In contrast, Taiwan, rates for shipments to the US would not be cost-effective for most manufacturers, only Motech orders this year sharply to indirect exports to United States orders lean. If this review rates cut come true, Motech will be the most affected manufacturers, original because of the tax advantages enjoyed high prices will instantly appear oppressive, return to the same starting point as the other competitors.

Watch Trina solar, solar manufacturers over the past year, is divided into three shipments to the us. 1) local capacity to China to pay tariffs of about 30%, 2) purchased Taiwan Motech cells with the lowest tax rates, to the third component, Motech 11.45% tax rate applicable, 3) buy a third battery, and encapsulated into a component in the third, three ways need not pay the tariffs.

Due to the land tax rate is too high, and the third battery capacity of scarce, 2015 many manufacturers to Motech solar cell to the third-generation factories into components, Motech so eat plenty of benefits of tax advantages, benefit from annual shipments. Motech indirectly to the United States order price is higher than the remaining plant at least US$0.1/W above, especially the second half of the United States orders a hot, Motech more United States highest orders over US$0.355/W, amounting to about 15% of gross margins.

Lin Yan Rong said the anti-dumping tax rate cut, a countervailing duty rate unchanged as the estimated cost figure, although this rate cut is small, but has major US manufacturers from China direct supplier costs less than using Motech increase has large cells, enough to impact Motech indirect United States the quantity and price of the order. 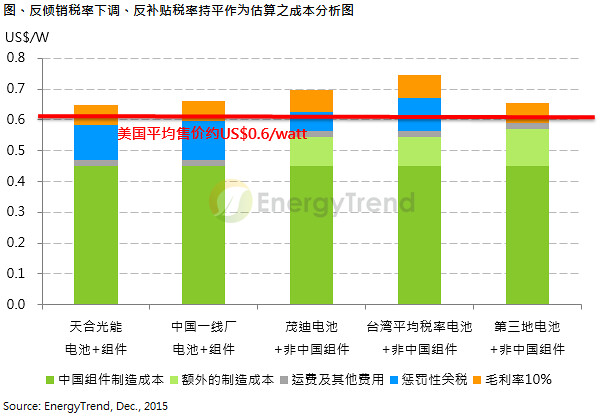