Just a few years ago, in North Africa in the desert, must have been oil or gas-driven power plants of this size, and the Noor-Ouarzazate complex is entirely solar-powered.

Noor-Ouarzazate complex is an iconic work, represents the solar power as the present situation of the development of an infrastructure project. This project is funded by the World Bank to provide loans, and also from the other side which reflects solar energy has become a mainstream energy.

Of course, fossil energy and the greenhouse effect concerns, is a major thrust of current solar power success. But when it comes to speed and success in the development of solar power generation, still have to come down to price.

In many parts of the world, solar power’s price had fallen to a low point, very close to the fossils and the price of gas. 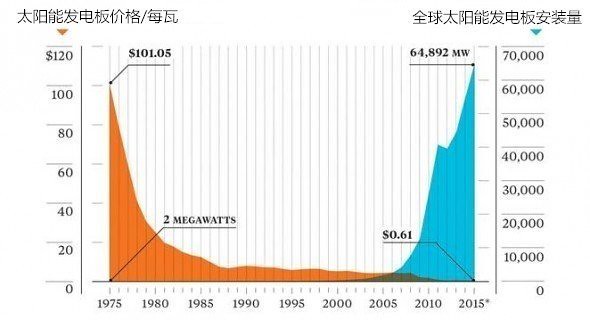 With the development of solar power, solar panel prices will fall further, forming a virtuous circle.

Not only is solar power prices are falling, prices of fossil energy are also on the rise. This is because once created a solar or wind energy power plant, its near-zero marginal cost, but every watt of energy produced from coal and oil power generation, all require more fossil fuels. Energy companies will choose for them “free” (zero marginal costs) of energy, which means that the demand for fossil energy will decrease, leading to their marginal costs.

BNEF (Bloomberg new energy finance) reports that in many of the major parts of the world, the cost of new coal and gas-fired power stations by 2015 are showing an upward trend in the second half, and renewable energy costs have continued to decline.

How do we solve the storage problem of solar energy?

Solar energy, a major problem is that it only runs during the day. This factor makes the fossil energy supporters argue that fossil fuel power generation should be used as a “basic” power options to ensure 24-hour supply of energy.

However, this shortcoming is also changed. The Noor-Ouarzazate is not PV power station. Instead, he uses concentrated solar power systems (CSP), this system has a great potential to provide sustained energy supply when there is no sun.

Hundreds of mirrors are used to focus the Sun’s energy, heating the liquid to produce steam to drive a turbine to produce electricity. These liquids can also be used to melt solid salt stored in the tank, which can maintain enough heat, can power even in the night.

This is a very secure technology, global energy group estimates that in 2050, more than 11% of the world’s energy will come from CSP power system.

Another major change is the rapid advances in battery technology. Now the families have been able to buy household battery sets to use with solar panels, and such purchases costs are expected to quickly reduce over the next few years.

What if it’s a cloudy day?

Our easy to understand why Morocco choose solar energy to meet the country’s energy needs. Other hot and sunny area in the world will make the same choice. But solar energy in other areas if applicable?

To answer this concern, Germany is a good example. While Northern Europe and no sunshine all year round, but the Nordic countries are among the best in the global solar power capacity.

Solar energy is not the only way to tackle the world’s energy needs, but it can give us much, much more. As costs decline and further restructuring of the energy market in the world, solar energy will be more important in the global energy market seats.

Original title: solar energy market is about to take over the world?