Visible before AEO2016 release United States paved the way for its successful implementation. AEO additional copy will be released later this month, when we will know exactly some assumptions of the new energy economy, policy, and the States with respect to the implementation of the State energy plan how decisions affect the deployment of renewable energy projects.

Federal Consolidated Appropriations Bill extending for wind turbine and solar power installation grants. Investment subsidies and production were extended to five years, but the amount of subsidy will be reduced year by year.

Investment grants is that Government departments will be part of the solar power plant project construction tax relief, subsidy amount up to 30%. The tax subsidies extended until the end of 2019, and then will be reduced year by year, until 2022, on the Internet and commercial solar subsidies will be reduced to 10%, and for residential solar subsidies will expire in 2022. In the previous Bill, the Government had planned in 2016 would cut subsidies to 10% or removed altogether.

Production subsidies mainly for wind farms, wind power will provide 2.3 cents per kilowatt hour in the first decade of subsidies. This benefit is only applicable to the construction of the wind farm before the end of 2016. After 2016, the subsidies for wind power will be reduced year by year until 2020, subsidies will be stopped. Previously, wind power subsidies by 2014 has stopped. 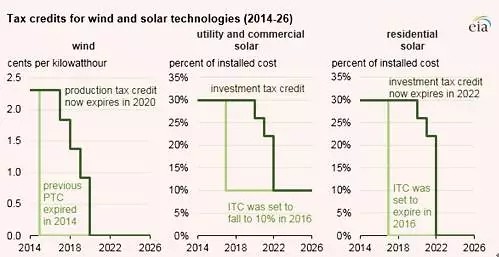 Other factors that promote renewable energy projects include:

By the United States Environmental Protection Agency released the clean energy plan will also affect the installed capacity of renewable, particularly after officially launched in 2022. When the progressive reduction or termination of the subsidy policy, the clean-energy plan will become one of the enabling power of renewable energy power generation. In addition to AEO2016 copy, United States energy information Administration will release a number of instances of the clean energy program of the compliance strategy for different assumptions, and in renewable power generation technology adoption in the future of the clean energy program will also play an important role.

In 2015, the United States States raise the renewable electricity standard, including California, Hawaii and Vermont, but in Kansas, the law has become a dead letter and not enforced. For now, most States have raised or are planning to increase the State’s renewable energy standard.

3. the cost of technology 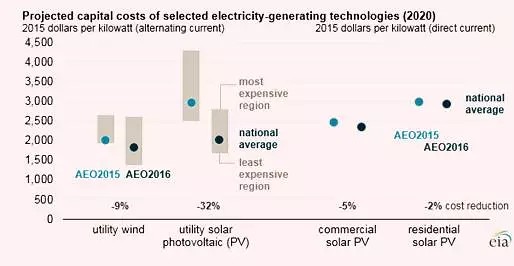 97% of wind online. Wind up to 2022 will continue to rise, but after 2022, along with wind power subsidies end, growth will slow. When after the implementation of the clean-energy projects, short cycle that will lead to more construction of the wind farm, wind farm developers as early as possible in order to take full advantage of potential economic benefits. Once the subsidy terminated, deployment of wind farms will be reduced. Due to the relatively small wind-rich regions, blindly increase wind power in these areas may affect the stability of the regional power supply.

Internet access solar power is working with residents, subsistence commercial rooftop solar photovoltaic panels generate electricity compete. Solar power electricity continues to rise in recent years, but with the end of 2019 solar power subsidies reduced, growth will gradually decrease in solar power. During the period of implementation of the clean-energy projects, solar power electricity will continue to rise, because the cost could be much lower. According to AEO2016 copy shows that by 2040, Internet capacity will catch the wind power installed capacity of solar power, up to 150 million kilowatts. Residential and commercial solar energy displayed in AEO2016 residential and commercial solar power generating capacity forecast in the future will be far higher than the AEO2015, the main reason is solar power subsidy extension as well as the cost and installation of solar photovoltaic equipment cost would fall further in the future. Compared to the Internet of solar energy, residents and commercial rooftop solar generating capacity increase is hardly affected by subsidies and the impact of the implementation of clean energy plan. 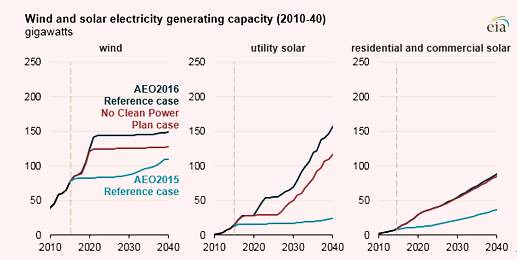