Power sector reform will continue to: America’s power sector in the last ten years there have been many significant changes, including coal to gas-fired power generation change, expansion of renewable energy generation, energy efficiency promotion, and General carbide, etc. The next 25 years this trend will continue and even accelerate. However, due to the diversification of the region, reform road map will reflect significant differences in different countries.

Lift capacity: renewable power the large-scale expansion and energy efficiency improvement will bring the total generating capacity rose sharply, but compared with actual consumption only slightly improved. Total installed capacity will increase 62%, increased from 1610GW in late 2015 to 2040 2605GW. But electricity consumption will grow only 10%, increased from 6232TWh to 6850TWh.

Diversified growth model: because different countries at different stages of economic development, North America and Latin America States demand growth reflected great differences. For example, Mexico and Chile’s electricity demand will increase by 62% and 48%, and the United States and Canada by 9% and 13%, respectively. United States will continue to service-oriented economic development and energy efficiency, will achieve a significant increase. Latin America’s economy will take off in many countries, and will focus on the development of energy-intensive mining and manufacturing.

United States natural gas exports to Latin America: the United States has fully turned to hydraulic fracturing the shale gas, the technology brings to market an unprecedented supply. Such a large supply of natural gas is currently available only to United States markets have an impact over the next decade, natural gas will be exported to Mexico and other countries.

Emissions decreased as the area’s largest emitters, United States made maximum contributions to the power sector CO2 emissions reduction. Benefit from energy efficiency and renewable energy applications, and we expect the Americas 2025 emissions will drop by 2015 on the basis of 9%. 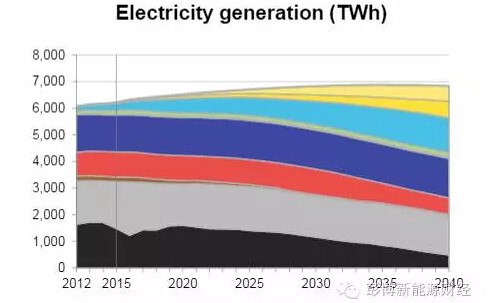