Polaris solar PV net news: founded solar SolarCity after nearly 10 years in person, Elon ˙ musk (ElonMusk) preliminary takeover by himself as Chairman of the company for household PV power generation projects, as with the integration of Tesla products. Beijing time on 22nd, United States electric-car maker Tesla will takeover solar SolarCity, the highest price of up to us $ 2.86 billion.

According to information released SolarCity, Tesla’s Board of Directors proposed to buy the SolarCity all outstanding common stock, trading returns, SolarCity will be Tesla’s common stock. Quote, according to correspondence, Tesla will be 26.5 USD-$ 28.5 per share price acquisitions SolarCity, which Tuesday closed at $ 21.19 premium of about 25-35%. This means that the amount involved in the transaction will peak at $ 2.86 billion.

After us stocks on Tuesday, Tesla down 12% market value € 2.1 billion, equivalent to the full market value of SolarCity; SolarCity surged 16% to earlier 22%. 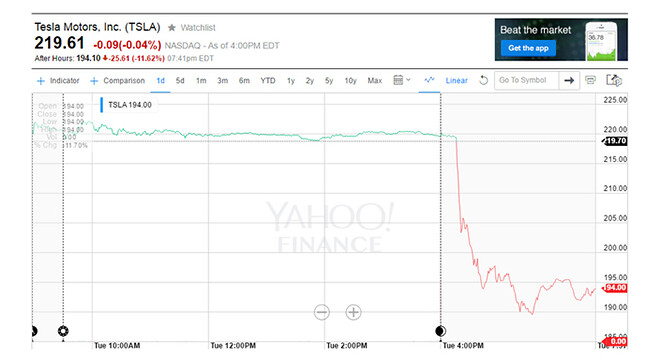 In 2006, musk founded solar SolarCity with their cousins, and by himself as Chairman of the Board of Directors. SolarCity solar equipment rental is the main source of income, users pay the rent on a monthly basis to the company, but do not need to install a solar energy system cost in advance.

Tesla and SolarCity, musk is not only the founder and largest shareholder, he held SolarCity22.2% shares, owns 21.3% shares of Tesla.

Tesla says “is the time to complete the picture. Tesla customers can drive clean-energy vehicles, and by efficient use of energy in the battery pack, but still need to get the best long energy: solar energy. ”

Mr MASKEY explained in a blog post on Tuesday, its ultimate goal is to build “the world’s only vertically integrated energy company, to provide users with clean energy products from end to end. “The acquisition of SolarCity will contribute to musk as soon as possible” world transportation industry to transition to a fully sustainable fuel use “goal.

Mr MASKEY said in a conference call that “this is something we considered and debated for many years. From the perspective of product integration and normal users and Enterprise provides the most compelling user experience point of view, we need to implement more stringent product integration. “He also said,” the timing is right because Tesla are trying to take steps to solve the problem batteries, and Solarcity will be able to provide some exciting new products. ”

If the deal goes, then all products to the Tesla brand landing. Mr MASKEY said the biggest difference is, marketing and implementation costs will fall, Solarcity and Tesla products will be consolidated.

Mr MASKEY said, “decided that the two companies combined, is the result of shareholders will vote independently of me. As long as the majority shareholder in favour except me, so this decision you must keep moving ahead. Truth is so simple, we may suggest an idea, but the final decision is up to the shareholders to decide. I personally think that this is something very easy to understand. As time goes on, more and more people will understand why. ”

Although Tesla and musk to Solarcity with confidence, but the solar business now days is not easy, and by Wall Street giant bears.

In 2015, SolarCity solar installations rose 73%, the company also invested a lot of money. This leads to SolarCity installed a surge at the same time, short-term operating income is negative, cash flow is negative.

“SolarCity in 2016, encountered financial problems. “He said,” the problem was the installation of a solar, SolarCity lose more. ”

This isn’t the first time he bears SolarCity, last August, said he was not optimistic about SolarCity. SolarCity’s share price has been falling since last year 40%.

Local time on May 9, SolarCity announced first-quarter earnings, although the installed capacity has increased, but net profit per share was higher than expected, its shares plunged 20.44%.

According to Bloomberg data, as of May 31, SolarCity approximately 40% shares were lent out to short. Finviz data is displayed, this means that companies with more than $ 2 billion in market value in the SolarCity is one of the 10 companies short positions with the heaviest.