In May, China imported polysilicon prices slightly rose to 16.59 dollars/kg per cent from 12.1% per cent. May rebound in prices is mainly attributed to the United States imported electronic grade products ratio increased significantly in polycrystalline silicon, so the price may go up.

According to country-specific import figures May total imports 10159, reduced 16.1% per cent, from Korea and the United States, and Germany, and Taiwan four imported polysilicon 8896 tons, total imports of 87.6%, 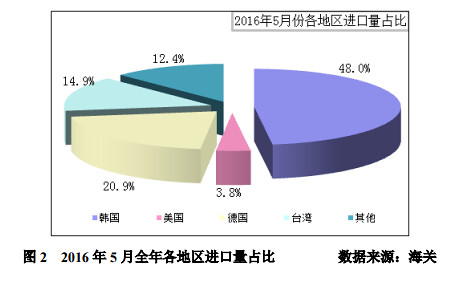 Worthy of note are the following three aspects:

First, Taiwan imported polysilicon for 9 consecutive months above thousand tons, and in April was increased from 1941, record, total imports of 16% compared to normal imports increased more than twice times, May also remain high at 1511, 14.9% per cent of total imports. Because by Taiwan imports to avoid “double reverse” levy has gradually become the mainstream and more rampant, even from the United States imports substantially reduced, since the United States and Taiwan imports and is still about 2000 tons/month, and the United States is not yet reduced amounts. It is well known that Taiwan did not polysilicon production enterprise, but customs data of Taiwan appears as a country of origin, through 8-bit encodings cannot differentiate between polysilicon ingot, while Taiwan also has ingot manufacturers, making investigation difficult.

Second, May from the Korea import polysilicon 4875 tonnes, a decrease of 26.3%, in the proportion of total inflow for the month up to 48%, today 1-May from Korea imported 28528 tons, up drastic increase of 48.6%. May since Korea by processing trade way imports polysilicon 349 tons, accounted for since Korea imports total of 7.2%, than Qian 50% around of processing trade accounted for than has sharply reduced, main remains due to “suspended processing trade” policy strictly implementation Hou, Korea of main export Enterprise OCI and Korea silicon industry (HankookSilicon) of tax only for 2.4% and 2.8%, anti-dumping tax on its fundamental not caused any effect, so are full produced run, still export China, In accordance with general trade to China, other tax rates slightly higher enterprise through re-exports Taiwan or special approval procedures by processing trade in China. So leads from Korea into the country increased the amount of polysilicon, and again hit a record high. Meanwhile, in 1-May from Korea imported polysilicon prices fell to $ 13.94 per kg, up slumped by 23.6%. The above data shows that the “double reverse” the Korea anti-dumping penalties too weak, Korea whether it is in the general trade and processing trade exports to China, had no effect on its, and it can be repeatedly lower the price dumping. Obviously, Korea imported both from the price or import production had serious impact on domestic markets, so Korea review dumping should be regarded as a top priority.

Country-specific statistics are as follows: 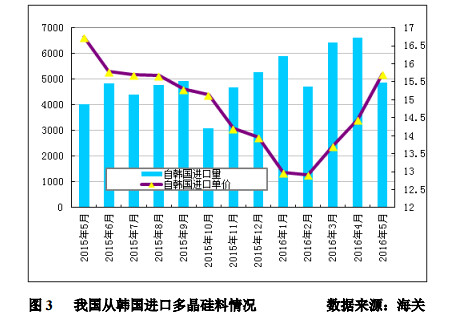 May 2016 from United States imports of 383 tons of polysilicon, the chain increased substantially by 28.5 times times May import price increased sharply to 33.91 dollars/kg per cent from 21.7% per cent. 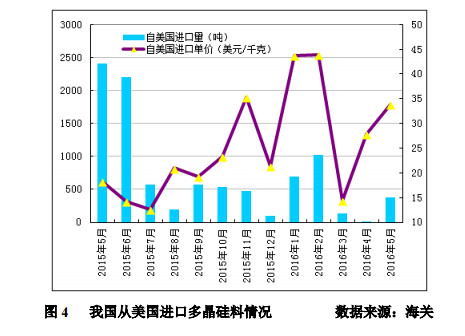 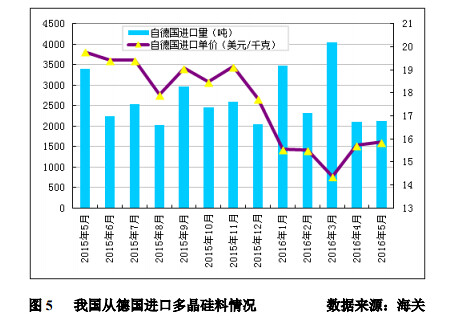 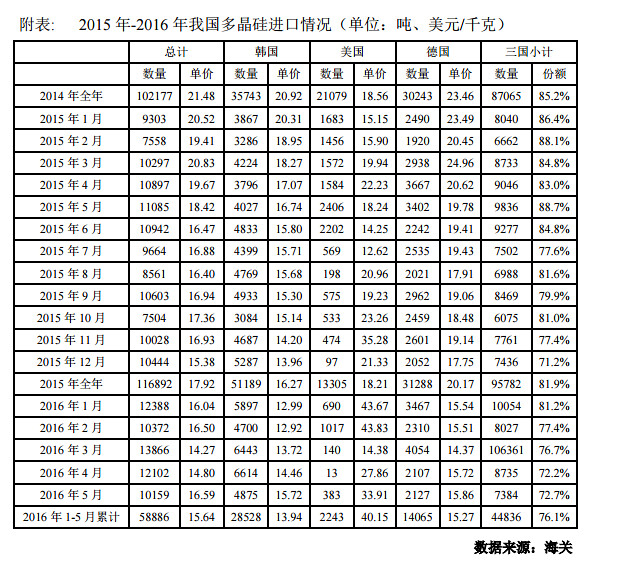