Polaris solar PV net news: after two years of shuffling adjustments, in 2013, the PV industry has begun to bottom out. In 2015, the PV industry and present a steady trend. But at the same time, continued development of the photovoltaic industry also faced domestic overcapacity, protectionism and the low prices of internal and external problems abroad.

First, from the perspective of industrial chain analysis competitive situation of PV industry in China

First of all, from the upstream polysilicon production, facing low prices overseas shocks, high quality and relative lack of capacity.

Downstream power plant investment pick up, direct drive upstream polysilicon production red, industry-wide operating rates at 85.4%. In 2015, China polysilicon capacity up to 188,000 tons of polysilicon production of 165,000 tons, an increase of 21.3%. The same period, foreign imports of Silicon in our domestic market share continued to decline to about 40% (as shown in Figure 2).

Figure 2 2008-2015 polysilicon production in China and growth in 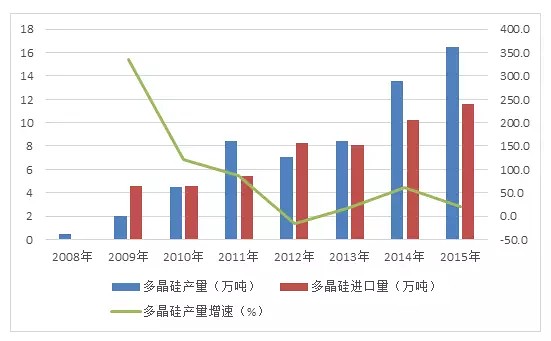 2013, the polysilicon industry concentration significantly increased in China, reached more than a million tons of capacity of enterprises, six in total industry capacity reached 76.6%, of which 68,000 tons/year capacity in Jiangsu, 36.2% per cent. Industry capacity utilization further enhanced, upgraded to 2014 in 90.9% (as shown in table 1). Some enterprises had exceeded foreign enterprises technique blocked, mastered the full autonomy of polysilicon production technology and preliminary realization of import-substitution base. 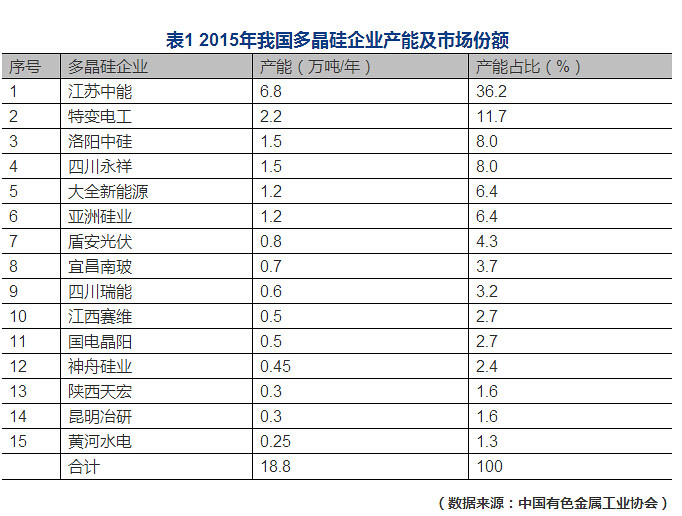 But at the same time, China’s polysilicon industry there are still some technical and market challenges:

First, technology is a breakthrough on the offshore blockade, but are in danger from the United States, and Korea and the impact of low dumping of EU enterprises in 2015, 116,000 tons of polysilicon abroad into the Chinese market;

Secondly, from the middle reaches of the component production, industry capacity utilization Division, profitability has improved.

2015 35GW component output in China, an increase of 19.4% (as shown in Figure 3). United States and industrialization as well as the impact of Europe’s debt crisis, and high barriers to block European PV markets, photovoltaic equipment an overwhelming impact of export-oriented development strategy, domestic PV equipment manufacturers to enhance the layout of the domestic market, on the other hand developing India, the Philippines, Thailand, and Chile pace of expansion in emerging market countries such as. 2015 4, the four countries account for PV module exports the global market share in China, respectively 13%, 7%, 8%, 5%, total 33%. 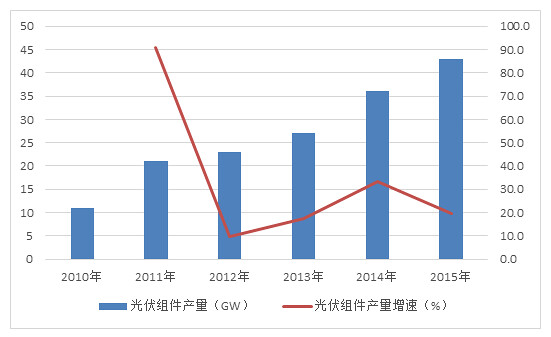 After 2012-2013 years of the industry reshuffle, 2014-2015 PV industry concentration in China continue to improve, top companies occupy a market share of around 60%. Industry capacity utilization rise further to 86%, showing an obvious tendency, annual production capacity of 200 MW following industry capacity utilization was only 50%. This indicates that the PV module overcapacity in the industry not only is the absolute excess primary, but both showing a surplus and structural surplus of features. Next PV industry mergers and acquisitions will further accelerate.

Boosted by power plant investment internal rate of return of more than 10%, the middle reaches of the component manufacturers have accelerated the pace of hydropower development in investment, promote the digestion of its solar module capacity on the one hand, on the other hand also led to a significant improvement in profitability. 2015 33 standard photovoltaic module manufacturers ‘ average profit rate reached 4.7%, an increase of 30.6%. 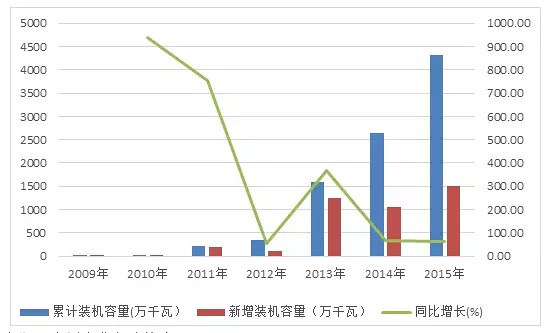 Photovoltaic power plants, relative to the power station operators ‘ caution, many component manufacturers actively involved in power plant construction. But the “internal rate of return above 10%” an important prerequisite, is underwritten in the early developer build of power transfer as soon as possible. If the buyer is not found, components manufacturers will have to turn to operators, to build power station in the early investment payback period will be longer, components manufacturers will face capital chain rupture risk. Expected depth of power plant operations and raw materials industry will have a period of adjustment, there will be a number of enterprises exiting from the power plant operations, will speed up the pace of structural adjustment.

Second, from the perspective of competition analysis the development of PV industry in China

The “Thirteen-Five” plan forward-looking, strategic, overarching to clear the continuous and healthy development of China’s economic and social standpoint and focus, has brought new opportunities for the development of photovoltaic industry and new space.

First of all, under the green economy will be the new normal, a new strategic choice, photovoltaic industry is China’s energy structure adjustment and energy transformation and upgrading of the major direction of the industry.

Secondly, we are promoting “along the way” strategy, “integration of Beijing, Tianjin and Hebei,” regional development strategies will create a large number of the PV industry needs, PV enterprises “going out” will continue to accelerate the pace.

First, industry will be further optimized.

Under the abandoned power rationing and price cut, our country will speed up the construction of demonstration area of distributed PV applications, photovoltaic industry will gradually shift to distributed projects, focusing on the development of large industrial park, economic development zone, public facilities and housing as the main roof based on distributed PV systems. By 2020, distributed PV power installed capacity will reach 70 million-kilowatt. Meanwhile, will select the resource conditions of the Western region, with large-scale areas of access and local absorptive capacity, ordered construction of photovoltaic power generation base.

Upstream polysilicon production component production in the middle and mergers and acquisitions will further speed up links will have a power plant investment operations and raw materials assets of smaller, poor economic returns of enterprises will be withdrawn from the market. Photovoltaic industry will gradually form a number of assets larger, core competence, ability to integrate with regional industry leaders.

Location of PV industry in China will be based on regional advantages, resource and industrial advantages and technological superiority to achieve poverty reduction, agriculture, climate, such as the productive integration of the industry, and to give priority to the development of the region’s most basic, most advantageous conditions, can achieve the first breakthrough in the industry segments.

Four is an innovative drive will be further highlighted.

“The Internet + PV of” becoming a trend, and intelligent level of PV industry in China will be further enhanced, and spawned a large number of disruptive business models and innovation enterprise. , Cloud computing, big data via the Internet and other emerging information technologies and means of PV industry the capability of independent innovation will rapidly increase, crystalline silicon manufacturing high precision, high conversion efficiency of photovoltaic devices, photovoltaic micro-grid system will be key areas of technical innovation and development of PV industry in China.

Five “go” will further speed up the pace.

“Along the way” of power facilities are relatively less developed countries and regions, the power gap, with broad space for development. In domestic overcapacity, European sanctions shadow still lives under the situation, expedite the process of production to “along the way” along the country, become a realistic choice for sustained and healthy development of PV industry in China and an important support for these countries and areas are expected to be the development of PV industry in China to undertake and new profit growth point.