Polaris solar PV net news: all along, Israel gave a small country, but the impression cannot be underestimated. As a small country, and its land area is only more than 20,000 sq km, only a little older than Beijing and its population is only just more than 8 million. However, it is under the geographical dilemma, driven by Israel in the area of renewable energy in the world, the birth such as Solel solar energy, Ormat geothermal technologies a leading provider of project and company. Recently, Israel in the field of solar energy announced that its construction of the world’s highest solar power taashalimuta (AshalimTower), will be completed by the end of 2017, its power generation capacity will meet Israel demand of 110,000 households.

Ashalimuta seen from afar, like a lighthouse. Its height reached 240 metres, even compared to the height of the tallest building in the world Burj Dubai more than 800 meters, seems to be worth mentioning, however, the solar Tower in the world, it is currently the largest solar power Tower Ivanpah, 103 metres higher. This height will undoubtedly set a new world record in the and worth writing about. Meanwhile, it will also become Israel’s largest solar power station, the world’s fifth-largest.

Israel-land in long, from North to South. There is a lot of desert in the southern region, ashalimuta, is located in the famous desert Negev desert (Negev). Bottom layout 55000 mirrors, covers an area of 300 hectares (about 1 million square meters), took the size of 400 football pitches. Mirrors to concentrate the Sun’s rays, they look like Sun flower, according to the Sun’s path, adjust. Gather the Sun’s rays to produce high temperature, the temperature in the boiler is heated to 600 degrees Celsius, high temperature steam to the top of the Tower, to produce electricity.

And now the world’s largest solar power station compared to Ivanpah, while ashalimuta won the “highest” award, however the overall size is much smaller than the Ivanpah. Ivanpah investment not only reached 2.2 billion dollars, about 4 times ashalimuta times lens area of 2.6 million square meters, is the ashalimu Tower 2.5 times times mirror number up to 175000, about 3 times the ashalimuta. Total installed capacity of 400MW, far more than the ashalimuta of the 121MW. 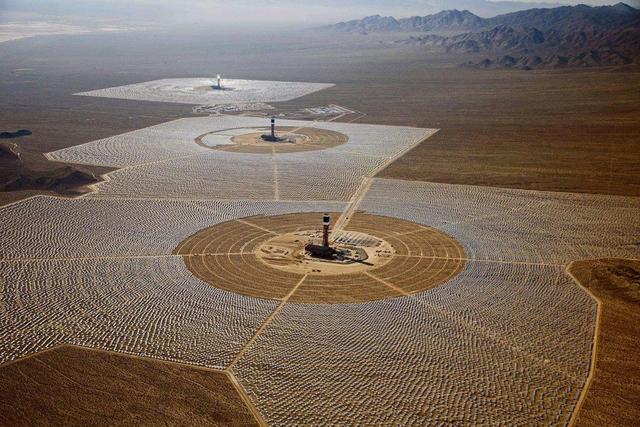 Whether it is “highest” or “largest” solar Tower power station, behind is the biggest player in BrightSource company, the company’s solar projects for the world-class advanced solar-thermal power generation technology. Traditional solar photovoltaic modules are used, the solar energy directly into electricity, however, this efficiency is not high, BrightSource uses concentrated solar power Tower, which greatly improves the efficiency of power generation, the technology through the boiler temperature is heated to a temperature of 600 degrees Celsius, high temperature steam turbine, which generates electricity.

Israel currently uses coal, oil and gas, power generation, and as the Eastern Mediterranean discovery of oil and gas fields, Israel rising domestic gas supply. At this stage, the traditional sources of energy continues to dominate, but Israel hopes that by 2020 the Government would raise the proportion of renewable energy to 10%.

Israel says Green Energy Association Executive EitanParnass, “in the current environment of the chaos in the Middle East, energy independence, promoting diversification of energy demand, Israel had no choice. ”

It is clear that ashalimuta built, let us see the Israel Government to spare no effort for the promotion of solar energy. Although solar power plant construction costs compared with conventional energy power stations, prices tend to be higher than 2-3, but by the economic, political, environmental, scientific and technological factors such as long term, Israel Government resolution in 2013, making the decision to build ashalimuta.

Sure is, ashalimuta construction, will strengthen Israel in the field of renewable energy leader.