Polaris solar PV net news: recently, the United States Department of energy (DOE) Web site “improving solar thermal power technologies, performance and Schedulability” study. The report is “on the road to SunShot” one of a series of studies.

Figure 1 is a trough and Tower system of the cost of electricity (LCOE) declines and the 2020 SunShot target, shows the cost of solar thermal power systems show a declining trend, to achieve the United States DOE SunShot program cost targets set by: 2020 dropped to 6 cents per kWh basis. “SunShot vision research” predicted the cost of investment and the development of the current situation of comparison, 2015-Tower power station costs fell in line with expectations, the main benefit from the falling cost of heliostats.

Compared with the variable PV output, under the 40% of renewable, solar thermal electricity systems increase the value of as much as 6 cents per kWh, as shown in Figure 2.

Study on the analysis and other similar shows, when assessing the renewable energy technology group, must be considered with heat storage system of grid-connected solar-thermal power stations with high value, instead of just taking into account the cost of electricity (LCOE). A more comprehensive approach–the net cost assessment system, including various technical comparison of the costs and benefits of network-wide system. A net cost on behalf of adding a new tradition or annual cost of renewable energy technologies (for example, heat storage system of solar thermal power plants, photovoltaic, gas turbine, combined cycle power plant) and replacing other resources and provides similar energy level and system reliability by avoiding the cost difference between. Relative to 1500MW reliable capacity conventional gas turbine and combined cycle power plants, representing the peak, middle and base load configuration of three solar thermal power net cost of the system is shown in Figure 3. As can be seen, for the current low gas prices and the cost of carbon emissions, solar thermal power station as a peaking tend to be configured. However, costs are high in natural gas prices and carbon emissions scenario, this decision becomes less clear. In this case, each type of solar thermal power system configurations and compared to the traditional choices have a big advantage, the capacity factor for the intermediate to advanced systems will become the preferred option. The capacity factor is the actual annual energy output and the ratio of output power for a year under full load conditions. 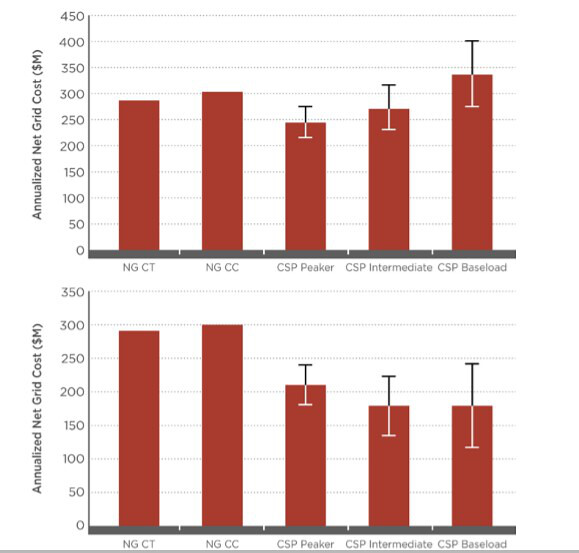 Net costs are similar, as shown in Figure 4. Every technical choice offers the same reliable volume. Figure 4 shows that at current technology costs, can be considered the most expensive option is solar + gas turbines, and it is not surprising, because with thermal storage for solar thermal power generation and grid-scale batteries are relatively immature technology. When considering future costs, I believe these results vary. 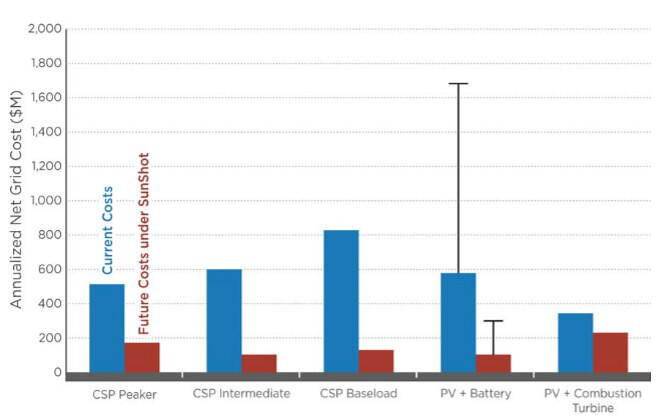 Original title: us releases report on the value of solar thermal power generation