Polaris solar PV net news: Japan fixed-price system (FIT) in place, the first generation of photovoltaic power plant has been running for four years. After completion of the fault emerged as time goes by, one of the soil erosion by water (Figure 1).

Figure 1: the soil beneath the Foundation was washed

If the grass is blooming State, along with the roots can remain in the water holding capacity of the soil, absorb a certain amount of rain, the surface of the soil and few serious losses. PV plant will cast a shadow on the solar panels, reduce electricity, so in many cases, not only in development and was removed, operation will continue to control weeds.

To plant zoysia grass and alfalfa and other methods to increase the water holding capacity, and made many attempts to curb soil erosion, rainwater flowing through surface, in conjunction with the low weed seeds are washed away, very difficult to root.

The ground bare of photovoltaic power plants, rainwater surface flow path is fixed. Therefore, in these places, rainwater will wash the soil. Even sex like a river into a ditch (Figure 2). 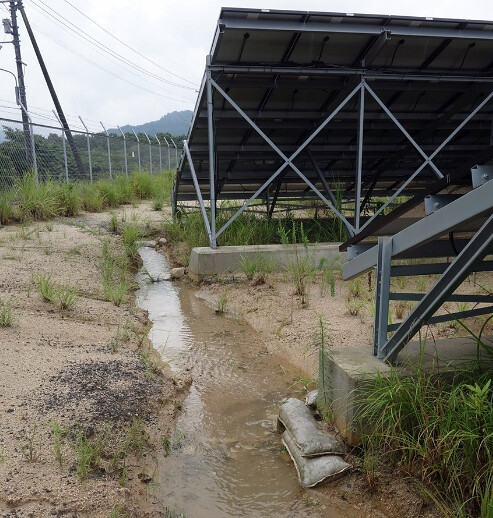 Base in contact with the ground after part of the soil is washed, can’t get enough design ideas of endurance, will damage long-term reliability and security failures.

There caused by the degree of erosion of soil above a certain threshold collapse case (Figure 3). The million-watt PV collapse happened after up sandbags to prevent soil erosion. 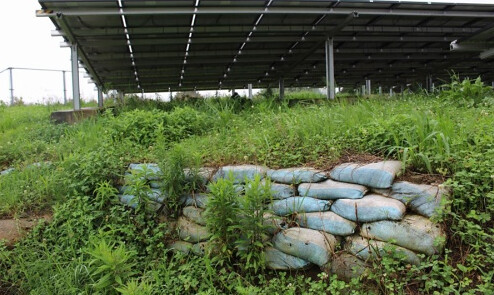 The PV for this many. In response, a common method is the use of sandbags and rocks prevent rainwater from further erosion surface (Figure 4). 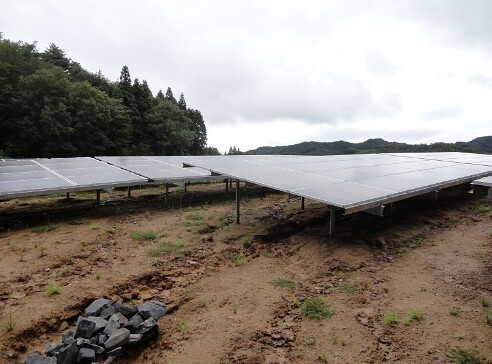 Not only power stations within the peripheral fence base erosion of soil is in contact with the ground part of the power station (Figure 5). 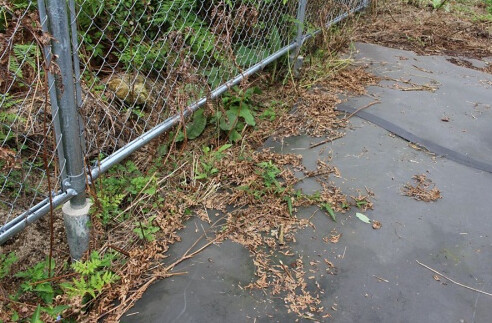 Figure 5: fence base beneath the soil is washed

This easy causing the fence to collapse, as well as external intrusion easier fault, need to respond in a timely manner.

On soil erosion and storm water discharge occurred due to soil erosion, as well as to external draining too much more than the original plan envisaged level of causing the failure cases. May also collapse spread to plants outside, as well as the construction of additional reservoirs, such as the power station.

So, survey construction and environment in more detail, on the soil erosion and drainage for more careful design is necessary.