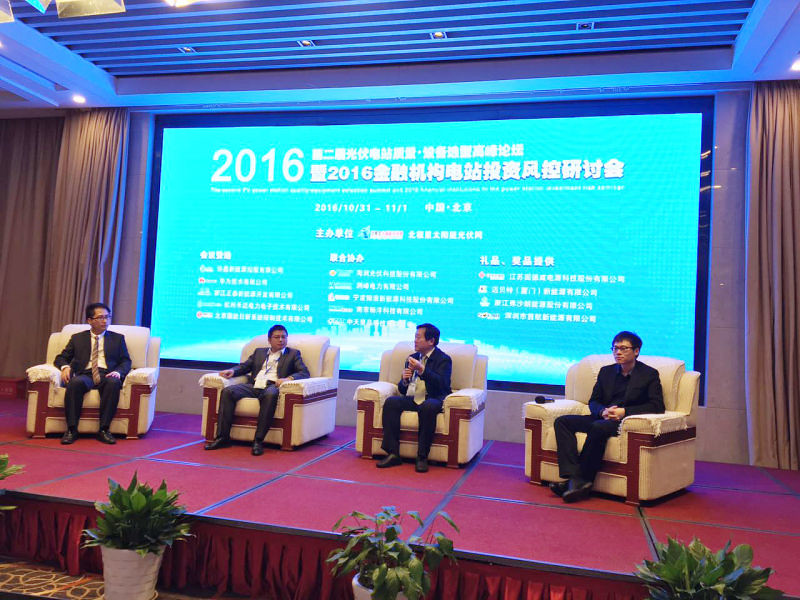 At the meeting, Wo Mai Yang Bo, General Manager of power electronic technology in Hangzhou released entitled from the angle of inverter PV system efficiency and security in the speech. 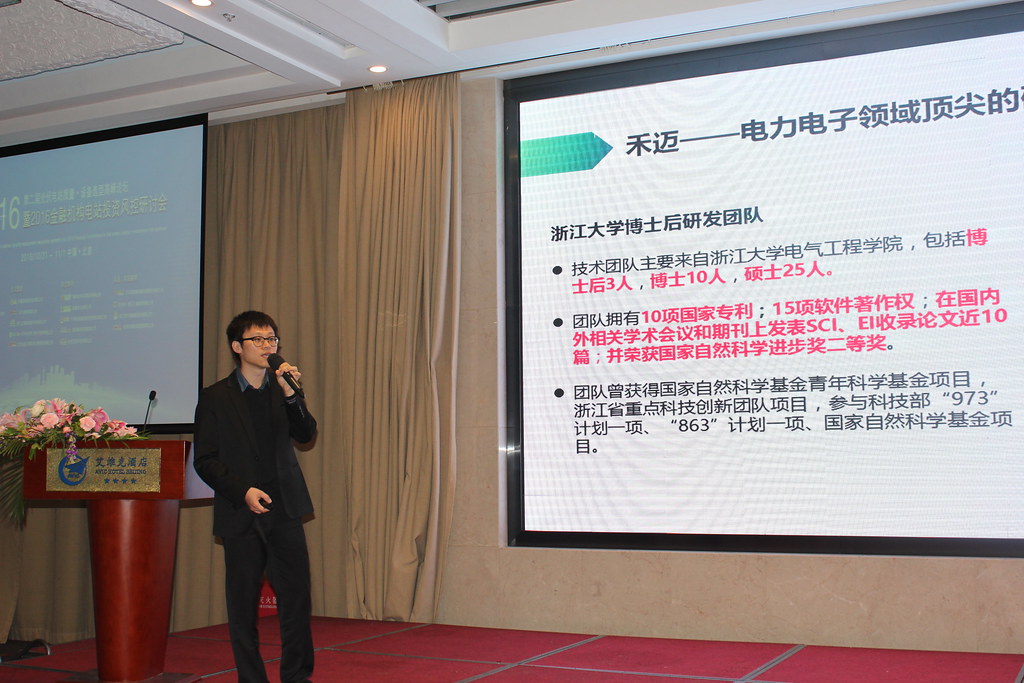 Wo in the beautiful city of Hangzhou, is a photovoltaic power station and residential photovoltaic system inverter and other specialized products of power electronics and technical services company. Although the company is still relatively young, but many technologies and products have been involved in, in the field of renewable energy, in addition to solar power, and energy storage technology, electric vehicle charging, etc.

Our technical team is from the school of electrical engineering of Zhejiang University National Laboratory of power electronics, including postdoctoral 3, 10 doctors and 25 people. Wo Mai team started in school, pay more attention to research on innovative technology, already has a number of national patents and software copyrights, it is worth mentioning that in 2016, as the main campus of Zhejiang University, we won the second prize of National Natural Science Foundation.

Today’s topic and PV inverter products, but at the same time and share some of our innovative technology and ideas.

Well known role of inverters in photovoltaic systems, all solar power are full through inverter, inverter is the core of photovoltaic systems in addition to components other than the most important. We is concern inverse variable device of conversion efficiency, but we and in thinking, effect power electronic converter of factors has many, research key of does not just it of efficiency of upgrade, more important of is to figure out we of energy source from Yu where, has what characteristics, solar component of characteristics with General battery of characteristics not as, must understand it of characteristics, to development out a and of suitable distribution of converter.

In turn, the PV system needs a lot of special demands on the inverter. One thing I was very impressed, predecessor of the photovoltaic industry once told me: car with 30,000, 300,000, there are 3 million, are traveling with the price difference is because the premium car, but no premium PV, earnings per unit is the same. Let us more revenue, must be requested from several aspects, such as generating efficiency higher, longer, lower system costs and maintenance costs, total revenue increased. It is important to achieve efficient energy conversion, reliability and operation mechanism and power matching, as well as lower maintenance costs, and that is of concern to everyone. Therefore, in addition to power other than to achieve the highest conversion efficiency, PV inverters have three important things need to be resolved, many of the standard, many companies are doing these technical requirements.

Speaking from the product development process of our company.

First of all, we provide our large power stations in a modular inverter solutions, from the structure of the Cabinet it is a centralized inverter, electric structure is divided into modules centralized inverters, for group functions. Module uses the most advanced t-type three-level transformation, efficiency can be achieved by 99%. Many inverter efficiency can do to 99% the market, he even did 99.9% in the future, since it is not possible for more than 100%, progress in space is very small, but even if the transformation efficiency as possible, whether to meet the system requirements?

Second, we provide our household system of micro-inverter solutions is an inverter after each component is added. He micro-inverter, also do the world’s highest efficiency, conversion efficiency 96.7%, static MPPT efficiency 99.8%,CEC efficiency 96.5%, but does bring an increase in output in real terms? We do not think that.

I could tell from the efficiency of PV systems, conversion efficiency, MPPT is efficiency for PV inverter the surface requirements, actually want to improve the efficiency of the photovoltaic power generation system, should cover more aspects, such as efficient components, more rational allocation and so on. From the perspective of how to improve the system of the inverter efficiency? In addition to the previously mentioned common concerns index 99%,MPPT efficiency 99.9% efficiency, other, potentially bigger: what are the constraints? Such as how to make power for longer. Solar energy is subject to seasonal fluctuations and time, generating daily, weekly, quarterly, the differences are very large. Traditional power electronic inverter is designed for traditional power input, designed according to the rated power and rated efficiency. PV system power input has changed very much, and that corresponding inverter how to design? The other hand, how to make systems more reliable, quicker repair time? a 500-kilowatt inverter shutdown loss is thousands of dollars a day, which is what I want to share he products through the concept.

Therefore, in addition to high conversion efficiency to achieve multiple MPPT technology, light load efficiency, power redundancy, we think that is the basis of this modular technology. Modular technique, Emerson do best before, on this basis, what we should do further?

First a is flexible variable of MPPT configuration technology, currently according to I understand only Wo Michael launched has such of technology, now we are know concentrated type inverse variable device General a MPPT, up reached 4 a MPPT, group series type inverse variable device each group series can has a MPPT, but they of MPPT number are is fixed not configuration of, and for module of for, each module combination on can achieved flexible of MPPT configuration has. In Zhejiang, mountain PV applications, we found an application requirements, centralized inverter can not solve the mountain of PV MPPT needs string inverter and expensive, but Wo modular inverter can solve this problem very well. Now a 500-kilowatt of inverter, there are 63-kilowatt by 8 modules, any module can be combined, for example a 500-kilowatt machine, you can 150-kilowatt a MPPT can be any combination of 100-kilowatt, 200-kilowatt, this is configured from modular, flexible configurations according to actual mountain and the corresponding match. Location difficult land conditions, you can use variable modular inverter MPPT to solve, this is our first advantage.

Second how to increase its power generation time? At light load when system components are effective, but electricity is very low, the inverter may not be able to start power generation, what should I do? since modules can intelligent loading and unloading, basic inverters can be kept at maximum efficiency, set is fully loaded you can achieve the highest efficiency, this is he reason of high efficiency can be a weighted average. This can be good, first generate a, the second generation time. Morning and evening solar module power output is relatively small, we only use the 50-kilowatt module to generate electricity, starting power becomes very small, can effectively extend the generation time.

Third, in solar systems, solar power plants down for maintenance and outage maintenance time is of the essence, the concept of the things I have always thought that UPS can continue, it is Emerson was on the concept of modular PV inverter, any one of the modules failed, other modules work independently, without the maintenance and, theoretically, could never shut down the inverter.

He never stop the human design was inspired to practice. Maintenance, operation and maintenance of the system both are important, fix 5 minutes or 5 days to fix, meaning thousands of or tens of thousands of dollars in losses, Wo modular inverter modules of the replaced, could be completed in one operation, is very simple and greatly reduces maintenance time, generation time increases.

To summarise, whether centralized inverters, string inverters, modular inverter have different applications. Wo Mai modular inverters in fault cases it reduces power loss to a minimum, plus the two flexible configuration before, especially suitable for mountain high PV MPPT occasions, which is from the owner’s point of view. By the way, distributed power and power are scattered, for us 50-kilowatt modules can be configured from 50kW to 1000kW matches, so as to give the landlord in addition to string inverters increase an option, inverter and overall costs will be much lower.

Above are my analysis from technical aspects, or put our technology into our product to make it modular inverters of some simple introduction.

Modular inverters and micro-inverter is a concept, micro counter for each component provides a MPPT, technically can provide the most efficient generating benefits to the user.

United States magazine NERL Shang published of a article papers, probably in two years yiqian, in United States large area do has many practice and theory of work, obtained a conclusion, is in mild shadow, and in the degrees shadow and heavy degrees shadow, micro-inverse system than group series type system power efficiency upgrade 5% to 15%, way mention about, component characteristics of different also can equivalent considered has shadow occurred, that we usually said of PV power short Board effect, professional terms called power lost distribution.

Micro-mix counter allows different components in the system, using inverse systems in foreign countries are free to increase PV modules, for manufacturers of electrical characteristics of each component does not have any requirements, allowing a mixture of components from different manufacturers, because each component is independent in the inverter can be arbitrary DIY access, feel free to increase the power of the system.

Addition a is system security, this may will caused group series type inverse variable device manufacturers of antipathy, so this a we only on technology, now basically households with System 80% fire are is due to PV component series of DC high pressure caused of, micro inverse variable device of entered voltage only 40 v around, so completely is security of, while hard caused arc led to fire, now in domestic do of roof project is said to have has has accident occurred, main is high pressure DC caused of shock and fire. Of course, using string inverter if the installation specifications, accessories, quality protection, installation quality control in place, these risks can also be effectively reduced.

I would like to tell you that if you really want to hold a good household electricity stations, households give people install a power station, I think the micro-inverter is a very good choice, I have 15 years warranty prices are relatively cheaper than the string type.

Finally, to sum up, the first is now our new modular inverter, we have improved the stability and reliability of the inverter, also introduced a new flexible multi MPPT structure.

Second, the micro-inverter is our family household PV power plant to provide another option. Wo micro counter the highest efficiency of the 96.7%, the highest protection class IP67, the longest warranty free 15, the domestic market share.

Third, technological innovation, to provide customers with more choices. I hope we Wo technology innovation to provide customers with more choice. Technology finished, share with you a little about our case. This is 30MW mountain hydropower station of Zhejiang, all using Wo modular inverter, here applied to our multi MPPT technology, because it has a different slope. This power station power generation now in very good condition, everyone is welcome to have a look.

This is our home photovoltaic system in thousands of households in Zhejiang, all using micro inverters, layout is very convenient and does not require any training, like component is easy to install, feedback of the people now is very good, you can go and have a look.

Here today, and thank you!