Polaris solar PV net news: 2017 silver solar energy needs from the record highs, copper instead of threats. According to leading analysts, silver used in photovoltaic cells will remain strong in 2017 and become an increasingly important source of demand, second only to the solar energy industry last year hit a new record.

2017 silver prices will rise, solar panel manufacturers will continue to reduce the battery front and back coating of silver, a trend that began in silver prices soared to nearly $50 per ounce in 2008-2011. Research is pushing for much more cheaper copper instead of silver.

Due to slow new photovoltaic device planned for 2017, “metal-focused” consulting firm said, “we expect demand for photovoltaic panels of silver this year will be slightly slower, though will continue to remain in the global times in 2016, the second high. ”

News and data provider Thomson Reuters, a division of-GFMS, said the solar industry in 2015 more than last year and bought 11% silver, the main use of this is the only growth. It is headquartered in Washington with silver mines, smelters, retailers and Industry Association’s latest estimates based on silver. This makes the silver market demand fell by 9%, and Silver’s daily average prices increased 9% per cent in 2016.

According to “metal-focused” the latest data, though much of the jewellery, silverware and silver investment demand dropped last year, but the total amount of industrial growth by 3%, silver high demand from the solar industry is a “key driver”. However, according to the October “PV technology roadmap (ITRPV)” the latest data last year, due to the amount of savings, leading new photovoltaic cells compared with ten years ago, only one-fifth of silver.

Now in the new silver used in photovoltaic cells cost under the current price of just less than 5 cents. According to data compiled by Bloomberg, as global capacity growth and new competition, forcing some manufacturers to sell their products in case of loss, spot buying price of photovoltaic cells for December fell to 36 cents per watt, or about $1.45 each battery.

According to the Association of silver metal analysts CRU12 report, “Bank accounted for 15-25% of the total manufacturing cost of solar panels”. “As a result, it has become the main focus of reducing costs. ” 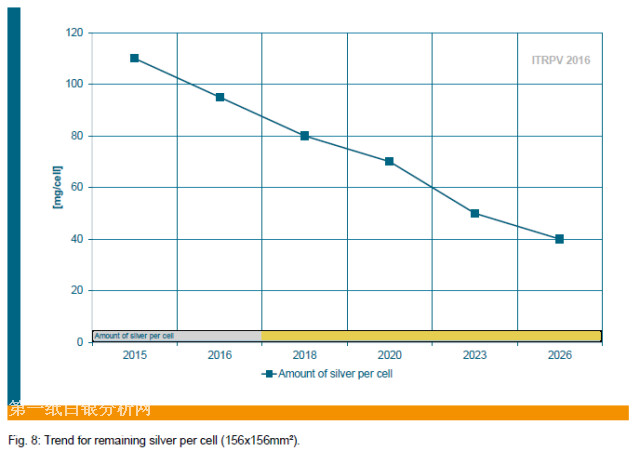 “Metal-focused,” said, “starting in 2011, manufacturers try to reduce the amount of silver used in photovoltaic cells, when silver prices close to record prices in the spring. According to the industry data, “best” PV products each battery’s average silver content dropped from 10 years ago, more than half a gram of just 0.1 grams.

2016 continues to conserve momentum now means “World silver consumption growth,” less favourable than 25% new solar energy capacity increases, but “in the past few years, savings rate has slowed markedly. “” In view of the current state of knowledge, “Germany Hayes gold and silver refinery Singapore technician AMO·sitasen in 2015, Dr PV business unit said,” it’s hard to imagine how silver can be replaced, because there is no other material can meet the requirements of price in a similar way. ”

“Silver high process stability is also very good. “However, alternative research continues,” you are using copper instead of Silver’s investment, “Reuters quoted Council Secretary-General yuehan·siminuo in 2016, the second half of the global solar said.

Although in 2011 after prices soared from the so-called “film” to “thin” batteries, “containing silver and aluminum metal paint/ink is used in the current technology the most critical and the most expensive non-silicon materials. ITRPV said. Crystalline silicon PV is the most common type of solar panel.

“As a result, needs to reduce paint consumption … This is very important, because silver prices are expected to remain high. “Silver remains the most widely used c-Si batteries is expected to front side metallization materials, but it faced real challenges from less-expensive copper, according to Jutta Trube ITRPV Dr, 2018 could begin mass production by 2026 will account for 25% of the market.

Original title: 2017 silver decline in demand will continue in the PV industry