In the case of without warning, Mr Zhu has been in de facto control behind the scenes people finally came to the fore, to be replaced Shu Hua as the GCL, Chairman of integration, which continued to serve as General Manager and directors of listed companies. Personnel changes behind Zhu mountains for a total value of listed companies, highlights, GCL integration business development expectations of more in the future. Is in need of attention, Shu Hua to capacity as its new Chairman took over time, in fact, less than 2 months.

Mr Zhu Shan from behind came onto the stage

In fact, Mr Zhu Shan as GCL integrated “Patriarch” the time is not too long. On October 23, 2014 Super Sun (GCL integration), the creditors ‘ meeting, due to common claims through 69.89%, GCL group and 8 other financial investors ultradian reorganization misadventure through, Mr Zhu won the shell of a valuable resource, a listed company, and subsequently changed its name to “Concord integration”.

Since then, the GCL in Jiangsu and Shanghai printing very few changes in the shareholding of, prompting Mr Zhu indirectly owns 50.59% shares of GCL integration, that is, the real boss of the company. Prior to this, Mr Zhu and his family are not as GCL integrated executives or Board members.

CBN reporter found that high-level shake-up of the GCL integration can be considered in two parts: first, the current 9 members of the fourth Board of Directors, only Shu Hua, Wang Dong and other two directors personnel changes. As a member of Concord, Shu Hua, Taicang GCL-poly electric limited, General Manager and Vice President of Concord power, one of their most important duties and GCL-poly energy Holdings Limited (hereinafter “GCL”), Executive Director and Chief Executive Officer. Since the GCL integration was formed after he was transferred to the company so far. Even more puzzling is that elected GCL Shu Hua has just integrated the fourth Chairman of the Board seats, to December 2, 2016, for a period of 3 years. Although the “Chairman” title, no strangers to him, the Board of Directors for the new Chairman of the Board of the nominations of candidates, and quite suddenly. However, Shu Hua remained as the company’s General Manager and Director in the power Center.

Second, with yet another director Wang Shu Hua at the same time to resign, he was the GCL Operations Director, CRC GCL (Beijing), General Manager of thermoelectricity, and GCL wisdom energy in transportation, CEO and COO, and new energy, GCL, Chief Operating Officer of Concord. Resignation of Directors, possibly because Mr Zhu mountain after entering the GCL integration, face the problem of lack of Board seats, a Director needed to reduce it.

Association “article 112th” provisions, GCL integrated Board of Directors made up of 9 Directors (including 3 independent directors), but the actual number, after Mr Zhu was appointed Chairman, a Director to have quit the provisions of 9-a, and this person is Wang Dong.

Prior to that, despite the significant shareholders, he was also unable to directly as members of the Board of Directors in corporate governance, of course, does not exclude private counsels, briefing, GCL integration of executives and communication possibilities. Personally this time platform, seems to have passed out the future performance of listed companies, business development more ideas, the new strategic ideas on the formation, execution. Prior to this, had returned to Lenovo Chairman LIU Chuanzhi, the outside world once thought poor Association quarterly business-related.

Since 2016, GCL integrated revenue is not bad, but the market changes rapidly so that its profits fell.

The first quarter of last year, its revenue surged by 167.33% year, to 2.91 billion yuan, net profit increased by 42.07%, but the second and third quarter company profits are diving in succession. The first three quarters, GCL integration achieved revenues of 9.38 billion yuan, up by a 63.7%, but only 210 million yuan of profits attributable to the parent company. Southwest securities analyst Huang Shichuan pointed out in the report, the company’s revenue growth was mainly due to the expansion of sales lead to sales growth, but has an obvious reduction in net profit.

Yesterday evening, in announced Zhu total mountain intends any new Chairman zhihou, he on on media said, Association Xin integrated in last Board of led Xia with two years of time completed has peer 10 years of long-term layout, in system integrated, and efficient component, and both at home and abroad market develop Shang has has results, the intends took over as Chairman a vocational, will continues to insisted technology led drive development, adjustment double main business, build new energy leading enterprise.

Entity level, GCL integration not only to quickly improve the General component of the market share, but also to actively improve their PERC and heterojunction solar cell technology, so as to develop Mount Kumgang for the future components, half components as well as large components, double glass components can be seen. 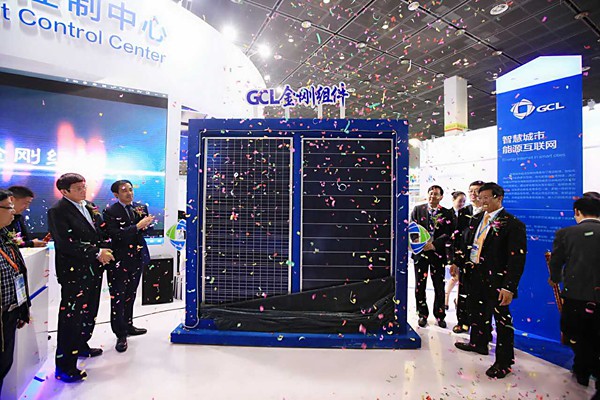 According to such a deployment, it needs to gain market share as soon as possible, to strengthen their research and development capabilities. The first three quarters of last year, GCL integrating “three” also due to the expansion of sales and business, significantly increased sales costs rose 180%, the administrative costs rose 244.8%, financial expenses grew by 382.8%. Research and development, spending 35.9292 million yuan in the first half of last year, also rose by 583.13% year.

In interpreting the “three” (marketing, management and finance) when the issue was rising too fast, company executives during a recent meeting of the investors mentioned in the will, compared with their peers, marketing, management costs of cost control is obvious, but the company also realized financial costs higher than their peers. The reason is that under the influence of original Suri, bankruptcy reorganization during the original Super date bank debt repayment rate of only $20%, impose a burden to the company in respect of banking and financing, the company has established new relationships with mainstream banks, financing fast growth, but enough for a business scale. Domestic payment terms longer than overseas, also led to the accounts receivable cycle, financing is higher than other companies, combined with non-public offering in advance, make the financial costs.

The financial side, represented by Guo Xin, GCL integrated supply chain finance programs continue to be strengthened. First half of last year, GCL integrated finance cooperative platform of its “Golden” was launched, which lasted 130 days, turnover exceeded 1 billion yuan. But the size and actual benefits from transactions, Guo Xin Xin integrates the short-term returns may be limited.

In 2017, for industrial and commercial use (such as communication, community, micro-grid using PV power station) the storage volume production and market, while some rely on fuel power generation, diesel power generation, such as higher-cost countries is one of the GCL integrated storage customers. In addition, the GCL integrated charging completed pilot testing, will increase in the future new-energy cars, bus stations, such as layout, and multi-directional cooperation with logistics enterprises, the bus company. Thus, the enterprise will range from simple “+ financial entities”, the transition to “design, products, and financial services,” the four directions.

Original title: Mr Zhu came onto the stage from behind the mountain suddenly changes, Chairman of Xin integrates meaningful