Polaris solar PV net news: efficiency and cost utility investors take into account two major factors when investing in power plants, both efficiency and cost advantages of the product are particularly favored by investors. “Leader plans” and the PV “Super leader” plan proposed once again to make efficient products become the focus of concern, controversy over single crystal and polycrystalline are once again rife. Statistics show, although Crystal conversion efficiencies than poly, but under the same conditions, return on investment still beat single crystal of high efficiency polycrystalline. As the promotion power of the technical improvement, production poor poly module power will be reduced further, poly due to both efficiency and cost advantages, will continue to occupy the dominant position in the market.

Push led by the National Energy Board, the introduction of PV “leader plans” from the beginning in 2015, the objective of the scheme is to encourage the promotion and application of advanced technologies, so as to accelerate the achievement of photovoltaic power and cheap Internet access. “The leader scheme” since the implementation of leader-compliant products more and more investors, and how to meet the “front-runner” select standard products, are directly related to the profit for the investor.

You can see from the above calculation method and affecting the main factor to the cost per kilowatt is the initial construction cost and electricity.

Photovoltaic power plant investment, component costs about 45% per cent, accounted for the remaining cost to 55% and component capacity under the agreed terms, higher module efficiency, the remaining costs, you can save costs. And the rest of the components of the cost efficiency factors, mainly land links, brackets, cables, installation, in fact only 20% per cent of total costs. Therefore, if efficient components to bring the remaining cost reductions at the same time, due to their own increased costs resulting in 45% of higher component costs too much, then it can lead to overall electricity costs rise, project yields have fallen.

First, we compare again—-photovoltaic power plant investment costs component prices, reference to the installed capacity of 20MW projects, and the construction cost was accounted. Can be seen from the following data: poly with 3.12 Yuan per watt prevail, its price is much higher than mainstream high performance single crystal technologies.

50MW project based, listed separately by three different components corresponds to the construction costs, and taking into account land cost by 25 different poly to 6.92 Yuan Dan Wa total cost far more than single crystals with high performance monocrystalline module, from the table below to compare the efficiency of polycrystalline cost advantage. 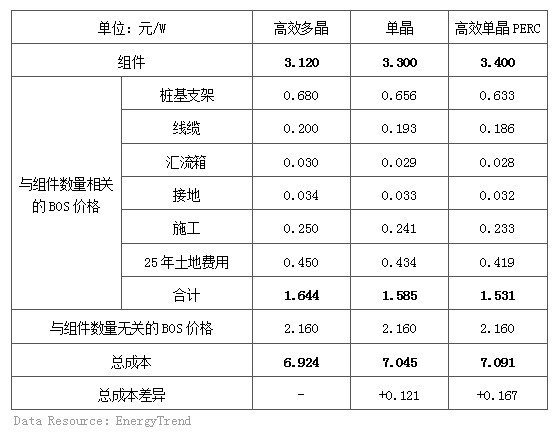 The above data we can see, power 10W, BOS can give systems cost about 0.05~0.06/w differ. However, because the three components of the price difference is too great, resulting in decline in single crystal high efficiency advantage did not bring the total construction cost. According to 50MW items, Crystal, high performance single crystal and polycrystalline component compared with the cost of the system, up to 6 million and 8.5 million, respectively.

Next, we compare in line with the “leader” component output differences in standards. According to PHOTON outdoor track report, per watt of generating capacity poly and monocrystalline module is not significantly different (pictured below), the difference mainly derived from components of quality of packaging, packaging materials, attenuation and other factors. Currently industry released attenuation parameters of components similar to basic, Crystal products attenuation of 3% for the first year, polycrystalline 2.5%; single crystal and low light response ability, and so selected for component manufacturers and BOM is the most important.

Therefore, efficient technologies can truly bring to power plant owners total return on investment gains, not just focusing on the components of power, combined with the cost factor to consider more realistic. High performance single crystal technology to the massive popularity, cannot alone draw a threshold of national leader, but must work harder on controlling costs, ensure efficient polycrystalline technology within a reasonable price range. In component costs account for a considerable proportion of silicon wafers, is an important means of reducing cost and increasing efficiency. Current single polysilicon prices one level, at least in half, single crystal component value can be seen.

Meanwhile, with the development of high performance polycrystalline, poly on the premise of cost increases are limited, efficiency has been steadily improved. Single poly power differences from past 20W narrowing even 5 w to 10W. Polycrystalline 275W components currently have mass production, when Super leader launched in the first half of next year, poly’s power production is expected to reach 280W, prices are projected to remain at the existing level. Such price and capacity advantages will mount a strong challenge to single crystal. Lumpy PERC purchasing single crystal component appears again delay the quandary of the 6 months.

In the superposition of multiple factors influence, heterogeneous components per watt of generating capacity to more than 20% more than ordinary single poly, which contribute significantly to the decline in electricity costs to a certain extent, even if construction costs higher than single crystal, the costs can also be quickly recovered in a subsequent return.