2016 China poly silicon imports have been high all year round the main reasons are: first, imports from South Korea has reached record levels. 2016 today from South Korea imported 70090 tons for the year, up drastic increase of 36.9%, 49.7% per cent of total imports, the highest in the imports in the first place. In November, South Korea’s imports reached 8366 tons, share in the total imports reached an unprecedented 61.6%. November monthly imports from South Korea closer to total imports in October, South Korea’s exports surge at the end, on the one hand due to the November lower demand warmer than in October, along with increasing demand for imported raw materials, polysilicon plant in South Korea until October due to weak demand backlog of inventory in November, flooding the domestic market. The other hand, Korea polysilicon plant under the influence of polysilicon midterm review on the South, in time for the determination of production and inventory exports to the Chinese market. 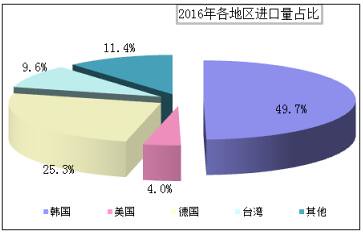 Judging from the import price, 2016 the annual import price of $16.45 per kg, per cent decline to 8.2%. Is mainly due to the United States, South Korea and Germany months import price has hit a record low of Germany suffered the largest decline in 2016, Germany imported polysilicon prices fell 22.6%. October South Korea’s import prices and a record low, resulting in import price is low for the month, falling to a record low of $13.63 USD/kg, fell 16%. November-December US-ROK polysilicon prices have rebounded, so gradually higher prices all year round. United States averaging 33.85 Yuan/kg, rose 85.9%, annual imports from South Korea’s average monthly price of $14.66/kg, fell 9.9%. 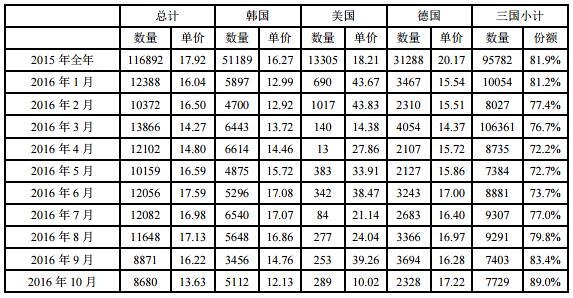